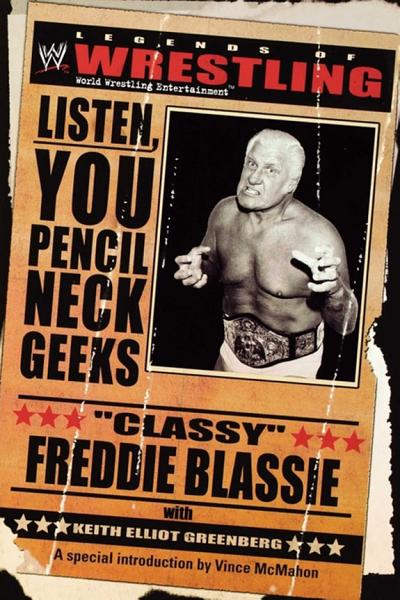 "Classy" Freddie Blassie is universally acknowledged as one of the most hated heels in wrestling history. Freddie really knew how to antagonize the fans -- how to "get heat." Death threats were frequent, enraged fans stabbed him twenty-one times, and he was even doused with acid. Undeterred, Blassie just took the action up a level. He reveled in being the heel. It was almost commonplace to see him biting his opponents and then spitting out their blood. Blassie would routinely "file" his teeth during interviews. His matches in Los Angeles' Olympic Auditorium brought him to the attention of Hollywood. Freddie's style and unpredictability made him a natural for the medium and he became one of the biggest draws in the wrestling business. In the early '60s, this notorious heel was invited to wrestle in Japan. Blassie both horrified and mesmerized sedate Japanese society. It was reported that a number of Japanese television viewers suffered fatal heart attacks after seeing Blassie bloody an opponent in the ring. A child of immigrants, Freddie grew up in a working-class neighborhood in south St. Louis. At seventeen, Freddie made his wrestling debut in a carnival. Unhappy with his choice of occupation, his family persuaded him to keep his "real" job, and for a while he worked as a meatcutter. But after serving in the Navy in World War II, Freddie returned to the world of wrestling, which was at the time still something of a carnival sideshow. Here he picked up his catch phrase: "pencil neck geek." Early in his career, Blassie wrestled on cards promoted by Jess McMahon, and would later work for both his son, Vincent James McMahon, and his grandson, Vincent Kennedy McMahon, the current owner of World Wrestling EntertainmentTM. Even after his active days in the ring came to an end, he showed that he still had the power to generate heat: "Classy" Freddie Blassie became the manager of heels, transferring to a whole new generation of wrestlers the style and knowledge that had made him a legend of wrestling. Blassie is still provoking the public, with his autobiography -- Legends of Wrestling: "Classy" Freddie Blassie -- Listen, You Pencil Neck Geeks -- written with Keith Elliot Greenberg. Freddie weaves vibrant tales of his days in wrestling with the likes of Hollywood Hulk Hogan, The Rock, George "The Animal" Steele, Capt. Lou Albano, John Tolos, The Destroyer, Killer Kowalski, Nikolai Volkoff, and the Iron Sheik. He frankly chronicles his dealings with colorful members of the wrestling fraternity and the promoters, even recounting the controversies -- like the infamous "boxer vs. wrestler" match with Muhammad Ali, who was managed by Blassie. His out-of-the-ring stories are equally compelling. Freddie details his countless sexual exploits and his three marriages. He reflects on the cult status that he gained after his song "Pencil Neck Geek" rocketed to the top of the Dr. Demento Show playlist. He recounts his touching relationship with comedian Andy Kaufman, who cast him in Breakfast with Blassie -- an underground classic in which Blassie uttered: "What the hell ever happened to the human race?"

Authors: Keith Elliot Greenberg, Classy Freddie Blassie
Categories: Biography & Autobiography
Type: BOOK - Published: 2010-06-15 - Publisher: Simon and Schuster
"Classy" Freddie Blassie is universally acknowledged as one of the most hated heels in wrestling history. Freddie really knew how to antagonize the fans -- how to "get heat." Death threats were frequent, enraged fans stabbed him twenty-one times, and he was even doused with acid. Undeterred, Blassie just took

Is This Guy For Real?

Focus On: 100 Most Popular WWE Hall of Fame

Authors: Billy Graham
Categories: Biography & Autobiography
Type: BOOK - Published: 2010-05-11 - Publisher: Simon and Schuster
"I'm the man of the hour," Superstar Billy Graham told his audiences, "the man with the power. Too sweet to be sour!" Despite years of devastating health issues (a long history of drug abuse led to a liver transplant in 2002), the man regarded as one of the most influential

Authors: Brian "Box" Brown
Categories: Comics & Graphic Novels
Type: BOOK - Published: 2014-05-06 - Publisher: First Second
Andre Roussimoff is known as both the lovable giant in The Princess Bride and a heroic pro-wrestling figure. He was a normal guy who'd been dealt an extraordinary hand in life. At his peak, he weighed 500 pounds and stood nearly seven and a half feet tall. But the huge

Ric Flair: To Be the Man

Authors: Ric Flair
Categories: Biography & Autobiography
Type: BOOK - Published: 2010-05-11 - Publisher: Simon and Schuster
Throughout the years, there may have been equally charismatic performers, comparable athletes, and even better interviews, but none were blessed with the same combination of talents to manage to stay on top for over three decades. To wrestling fans, the Nature Boy is a platinum-blond deity, a sixteen-time world champion