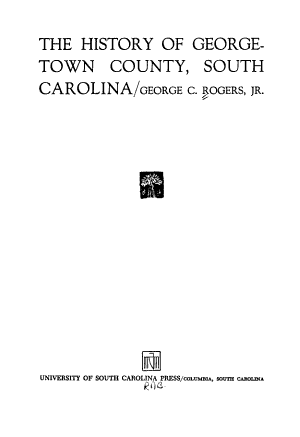 Authors: Roy Talbert, Jr., Meggan A. Farish
Categories: History
Type: BOOK - Published: 2014-12-18 - Publisher: Univ of South Carolina Press
The Antipedo Baptists of Georgetown is the history of the First Baptist Church of Georgetown, South Carolina, as well as the history of Baptists in the colony and state. Roy Talbert, Jr., and Meggan A. Farish detail Georgetown Baptists’ long and tumultuous history, which began with the migration of Baptist exhorter William Screven from England to Maine and then to South Carolina during the seventeenth and eighteenth centuries. Screven established the First Baptist Church in Charleston in the 1690s before moving to Georgetown in 1710. His son Elisha laid out the town in 1734 and helped found an interdenominational meeting house on the Black River, where the Baptists worshipped until a proper edifice was constructed in Georgetown: the Antipedo Baptist Church, named for the congregation’s opposition to infant baptism. Three of the most recognized figures in southern Baptist history—Oliver Hart, Richard Furman, and Edmond Botsford—played vital roles in keeping the Georgetown church alive through the American Revolution. The nineteenth century was particularly trying for the Georgetown Baptists, and the church came very close to shutting its doors on several occasions. The authors reveal that for most of the nineteenth century a majority of church members were African American slaves. Not

Authors: Sharon Freeman Corey
Categories: Architecture
Type: BOOK - Published: 2016 - Publisher: Arcadia Publishing
Georgetown is the third-oldest city in the state of South Carolina and the county seat of Georgetown County. Named for King George III of England, Georgetown County lies on the Atlantic Ocean surrounding Winyah Bay. The county's rivers--Santee, Sampit, Black, Pee Dee, and Waccamaw--were named by the Native Americans who were the area's first inhabitants. In 1732, the land was settled by the English, French, and Scots. Their first staple crop was indigo, but rice soon became the indisputable king of the Lowcountry and flourished in the marshes along the banks of the county's many rivers, creeks, and bays. By 1850, the county contained more than 175 rice plantations. The plantation era ended with the Civil War, the loss of enslaved labor, and a series of devastating hurricanes. Georgetown County's history will forever remain a part of the live oaks and Spanish moss found throughout the county and is retold in every cemetery within Images of America: Georgetown County's Historic Cemeteries.

Authors: Ramona La Roche
Categories: History
Type: BOOK - Published: 2000 - Publisher: Arcadia Publishing
Located in one of the Palmetto State's most picturesque regions, Georgetown County is a beautiful coastal county full of rich African- American traditions and a distinct Gullah heritage, from its roots in the antebellum South to the present. An integral part of the identity of the Lowcountry, the black community has played a prominent role in the successful development of the county over the years, and this volume serves to highlight and celebrate the county's people and their achievements, highlighting recognizable citizens and families, both prominent and everyday.