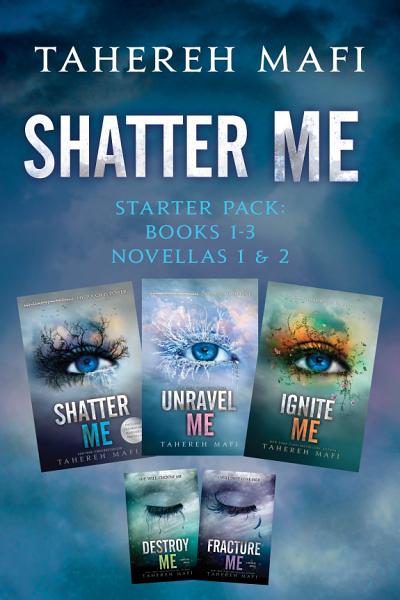 The Shatter Me series is perfect for fans who crave action-packed young adult novels with tantalizing romance like Divergent by Veronica Roth, The Hunger Games by Suzanne Collins, and Legend by Marie Lu. Tahereh Mafi has created a captivating and original story that combines the best of dystopian and paranormal and was praised by Publishers Weekly as "a gripping read from an author who's not afraid to take risks." This collection includes the three novels and two novellas in the series. Shatter Me: No one knows why Juliette's touch is fatal, but The Reestablishment has plans for her. Plans to use her as a weapon. But Juliette has plans of her own. After a lifetime without freedom, she's finally discovering a strength to fight back for the very first time—and to find a future with the one boy she thought she'd lost forever. Destroy Me: Set after Tahereh Mafi's Shatter Me and before Unravel Me, the spellbinding sequel, Destroy Me is a novella told from the perspective of Warner, the ruthless leader of Sector 45. Unravel Me: Juliette is still haunted by her deadly touch. But now that she has teamed up with other rebels with powers of their own, she'll be able to fight back against The Reestablishment to save her broken world. With the help of these new allies, she'll also finally learn the secret behind Adam's—and Warner's—immunity to her killer skin. Fracture Me: In this electrifying sixty-page companion novella to the New York Times bestselling Shatter Me series, discover the fate of the Omega Point rebels as they go up against The Reestablishment. Set during and soon after the final moments of Unravel Me, Fracture Me is told from Adam's perspective. Ignite Me: With Omega Point destroyed, Juliette doesn't know if the rebels, her friends, or even Adam are alive. But that won't keep her from trying to take down The Reestablishment once and for all. Now she must rely on Warner, the handsome commander of Sector 45. The one person she never thought she could trust. The same person who saved her life. He promises to help Juliette master her powers and save their dying world . . . but that's not all he wants with her.

Authors: Tahereh Mafi
Categories: Juvenile Fiction
Type: BOOK - Published: 2014-07-08 - Publisher: Harper Collins
The Shatter Me series is perfect for fans who crave action-packed young adult novels with tantalizing romance like Divergent by Veronica Roth, The Hunger Games by Suzanne Collins, and Legend by Marie Lu. Tahereh Mafi has created a captivating and original story that combines the best of dystopian and paranormal

The Springs: The Complete Collection

Authors: Elena Aitken
Categories: Fiction
Type: BOOK - Published: 2016-06-14 - Publisher: Elena Aitken
Nestled in a mountain valley on the edge of a crystal clear lake...a ski resort up the road...an exclusive new spa...The Springs has it all! Fall in love with the people of Cedar Springs with this MASSIVE and COMPLETE box set from USA Today Bestselling Author Elena Aitken. With over

For Her Complete Collection

Authors: Alexa Riley, Rhenna Morgan
Categories: Fiction
Type: BOOK - Published: 2018-08-13 - Publisher: Carina Press
New York Times bestselling author Alexa Riley’s For Her Complete Collection shows just what happens when strong, possessive men find the women of their dreams. Everything for Her I’ll never forget the way she looked, so confident and sure of herself. I watched her from a distance. She wasn’t ready