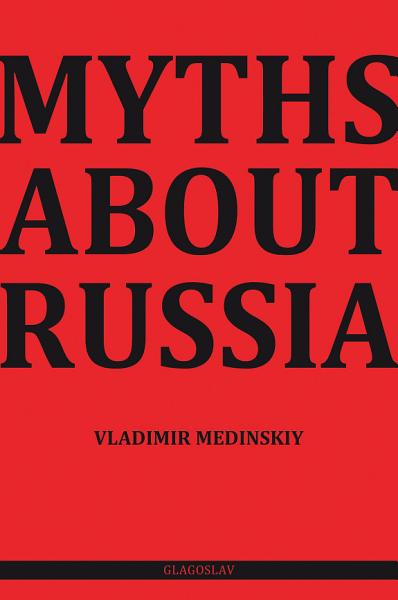 Russia’s rich history is full of secrets: there’s not another country in the world with so many skeletons in its closet. Vladimir Medinskiy’s new book offers the reader the opportunity to get better acquainted with some myths about Russia in an quick, easy and entertaining way. The book covers some of the most interesting, colourful and controversial debates in Russian history and the most popular myths about Russia: vodka and its role in some incredible adventures, Russia’s problems (apart from the roads and having too many fools), some lessons from the Bastille and the Civil War, the last testament of Peter the Great, amongst many others. In his book the author tackles some of the most pressing questions about Russia: whether you can trust Russians, the meaning of progress in Russian terms, who really won at the Battle of Borodino two hundred years ago, why Russians call Napoleon ‘the consummate liar’, and also whether Russians are the true originators of petrol, mobile phones and the cinema. Myths About Russia is Medinskiy’s original and humorous take on the subject: in this book, he diligently unravels the myths surrounding this vast and complex nation, picking them apart to uncover the truth about Russia and her fascinating history. *** Vladimir Medinskiy is a Russian statesman, professor, essayist and novelist. Since May 2012 he has held the post of Minister of Culture of the Russian Federation. Although he is the author of several popular books on advertising, PR and history, his Myths About Russia series is Medinskiy’s most famous, having been the bestselling Russian popular history series of recent years. In 2012 he published his first work of fiction, The Wall, which critics have called one of the best examples of the revival of the historical novel in Russia today. Medinskiy studied at the Moscow State Institute of International Relations and graduated with honours from the Faculty of International Journalism. During his university years, he also participated in the activities of student journalist associations, worked as a press service intern at the Soviet (and then Russian) Embassy in Washington, D.C. From 1992 to 1998 he was head of the PR agency Ya Corporation. After gaining his degree at the Moscow State Institute in 1997, Vladimir Medinskiy began his teaching career in the university’s Faculty of Journalism. He gained his doctorate in 1999 and since then has taught as a professor at the same university. From 2010 to its liquidation in 2012, Medinskiy was appointed as a member of the Presidential Commission to Counter Attempts to Falsify History to the Detriment of Russia's Interests. In July 2011, he became a member of the board of the Russkiy Mir Foundation, which aims to promote Russian language and culture through various programs internationally.

Authors: Vladimir Medinskiy
Categories: History
Type: BOOK - Published: 2018-01-01 - Publisher: Glagoslav Publications
Russia’s rich history is full of secrets: there’s not another country in the world with so many skeletons in its closet. Vladimir Medinskiy’s new book offers the reader the opportunity to get better acquainted with some myths about Russia in an quick, easy and entertaining way. The book covers some

Democracy and Myth in Russia and Eastern Europe

Authors: Alexander Wöll, Harald Wydra
Categories: History
Type: BOOK - Published: 2007-10-18 - Publisher: Routledge
In the absence of democratic state institutions, eastern European countries were considered to possess only myths of democracy. Working on the premise that democracy is not only an institutional arrangement but also a civilisational project, this book argues that mythical narratives help understanding the emergence of democracy without ‘democrats’. Examining

Authors: Conny Mithander, John Sundholm, Adrian Velicu
Categories: Psychology
Type: BOOK - Published: 2013 - Publisher: Rodopi
This volume is the first comprehensive mapping of how practices of cultural memory in post-communist countries and other late newcomers to the European Union have been affected due to the fall of the Berlin Wall and the collapse of communism. The essays cover Austria, the Czech Republic, Finland, the unified

Building a Future with BRICs

Authors: Mark Kobayashi-Hillary
Categories: Business & Economics
Type: BOOK - Published: 2007-09-27 - Publisher: Springer Science & Business Media
In 2003, Goldman Sachs published a startling report on the BRICs (Brazil, Russia, India, and China) region: These four countries would be larger than the G6 economics within 40 years, muscling their way to economic dominance and powering past developed countries such as the United Kingdom, Germany, and Japan. This

Authors: Robert Legvold
Categories: Political Science
Type: BOOK - Published: 2007-03-27 - Publisher: Columbia University Press
Because the turbulent trajectory of Russia's foreign policy since the collapse of the Soviet Union echoes previous moments of social and political transformation, history offers a special vantage point from which to judge the current course of events. In this book, a mix of leading historians and political scientists examines

Russia After the Fall

Authors: Andrew Kuchins
Categories: History
Type: BOOK - Published: 2002 - Publisher: Carnegie Endowment Series
Russia's first decade after the collapse of the Soviet Union has been simultaneously tumultuous and transformative. For most of the 1990s the Russian economy was in free fall, the legal system in absentia, and the majority of citizens engaged primarily in survival efforts. Not surprisingly, the former superpower also struggled