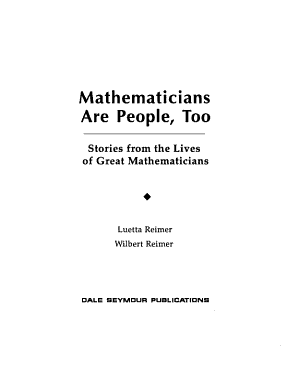 Looks at the history of mathematical discoveries and the lives of great mathematicians.

Authors: Reuben Hersh, Vera John-Steiner
Categories: Mathematics
Type: BOOK - Published: 2010-12-13 - Publisher: Princeton University Press
Mathematics is often thought of as the coldest expression of pure reason. But few subjects provoke hotter emotions--and inspire more love and hatred--than mathematics. And although math is frequently idealized as floating above the messiness of human life, its story is nothing if not human; often, it is all too human. Loving and Hating Mathematics is about the hidden human, emotional, and social forces that shape mathematics and affect the experiences of students and mathematicians. Written in a lively, accessible style, and filled with gripping stories and anecdotes, Loving and Hating Mathematics brings home the intense pleasures and pains of mathematical life. These stories challenge many myths, including the notions that mathematics is a solitary pursuit and a "young man's game," the belief that mathematicians are emotionally different from other people, and even the idea that to be a great mathematician it helps to be a little bit crazy. Reuben Hersh and Vera John-Steiner tell stories of lives in math from their very beginnings through old age, including accounts of teaching and mentoring, friendships and rivalries, love affairs and marriages, and the experiences of women and minorities in a field that has traditionally been unfriendly to both. Included here are

Authors: Allison K. Henrich, Emille D. Lawrence, Matthew A. Pons, David George Taylor
Categories: Academic achievement
Type: BOOK - Published: 2019 - Publisher:
Wow! This is a powerful book that addresses a long-standing elephant in the mathematics room. Many people learning math ask ``Why is math so hard for me while everyone else understands it?'' and ``Am I good enough to succeed in math?'' In answering these questions the book shares personal stories from many now-accomplished mathematicians affirming that ``You are not alone; math is hard for everyone'' and ``Yes; you are good enough.'' Along the way the book addresses other issues such as biases and prejudices that mathematicians encounter, and it provides inspiration and emotional support for mathematicians ranging from the experienced professor to the struggling mathematics student. --Michael Dorff, MAA President This book is a remarkable collection of personal reflections on what it means to be, and to become, a mathematician. Each story reveals a unique and refreshing understanding of the barriers erected by our cultural focus on ``math is hard.'' Indeed, mathematics is hard, and so are many other things--as Stephen Kennedy points out in his cogent introduction. This collection of essays offers inspiration to students of mathematics and to mathematicians at every career stage. --Jill Pipher, AMS President This book is published in cooperation with the Mathematical Association of

Authors: Theoni Pappas
Categories: Mathematics
Type: BOOK - Published: 2009-06-29 - Publisher: Paw Prints
A collection of stories about famous mathematicians and their very human background in the history of mathematics, including the paranoia of Godel and how Newton's apple never was

Authors: Gunter M. Ziegler
Categories: Mathematics
Type: BOOK - Published: 2013-07-22 - Publisher: CRC Press
The subject of mathematics is not something distant, strange, and abstract that you can only learn about—and often dislike—in school. It is in everyday situations, such as housekeeping, communications, traffic, and weather reports. Taking you on a trip into the world of mathematics, Do I Count? Stories from Mathematics describes in a clear and captivating way the people behind the numbers and the places where mathematics is made. Written by top scientist and engaging storyteller Günter M. Ziegler and translated by Thomas von Foerster, the book presents mathematics and mathematicians in a manner that you have not previously encountered. It guides you on a scenic tour through the field, pointing out which beds were useful in constructing which theorems and which notebooks list the prizes for solving particular problems. Forgoing esoteric areas, the text relates mathematics to celebrities, history, travel, politics, science and technology, weather, clever puzzles, and the future. Can bees count? Is 13 bad luck? Are there equations for everything? What’s the real practical value of the Pythagorean Theorem? Are there Sudoku puzzles with fewer than 17 entries and just one solution? Where and how do mathematicians work? Who invented proofs and why do we need them? Why