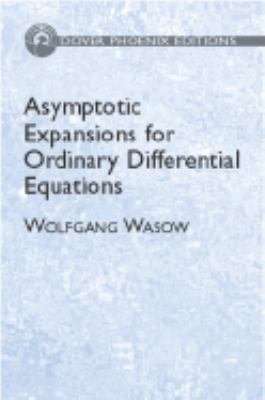 "A book of great value . . . it should have a profound influence upon future research."--Mathematical Reviews. Hardcover edition. The foundations of the study of asymptotic series in the theory of differential equations were laid by Poincaré in the late 19th century, but it was not until the middle of this century that it became apparent how essential asymptotic series are to understanding the solutions of ordinary differential equations. Moreover, they have come to be seen as crucial to such areas of applied mathematics as quantum mechanics, viscous flows, elasticity, electromagnetic theory, electronics, and astrophysics. In this outstanding text, the first book devoted exclusively to the subject, the author concentrates on the mathematical ideas underlying the various asymptotic methods; however, asymptotic methods for differential equations are included only if they lead to full, infinite expansions. Unabridged Dover republication of the edition published by Robert E. Krieger Publishing Company, Huntington, N.Y., 1976, a corrected, slightly enlarged reprint of the original edition published by Interscience Publishers, New York, 1965. 12 illustrations. Preface. 2 bibliographies. Appendix. Index.