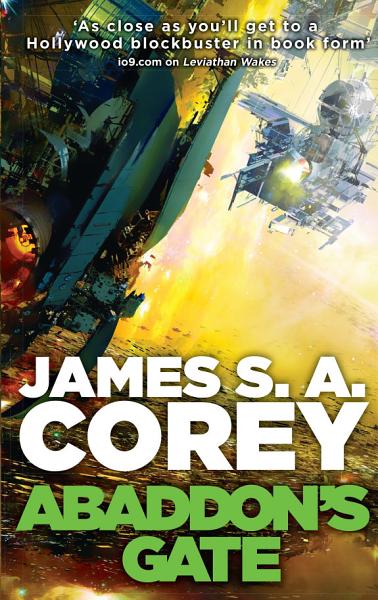 NOW A PRIME ORIGINAL SERIES Abaddon's Gate is the third book in the New York Times bestselling Expanse series. For generations, the solar system - Mars, the Moon, the Asteroid Belt - was humanity's great frontier. Until now. The alien artefact working through its program under the clouds of Venus has emerged to build a massive structure outside the orbit of Uranus: a gate that leads into a starless dark. Jim Holden and the crew of the Rocinante are part of a vast flotilla of scientific and military ships going out to examine the artefact. But behind the scenes, a complex plot is unfolding, with the destruction of Holden at its core. As the emissaries of the human race try to find whether the gate is an opportunity or a threat, the greatest danger is the one they brought with them. The Expanse series has sold over two million copies worldwide and is now a major television series. The Expanse series: Leviathan Wakes Caliban's War Abaddon's Gate Cibola Burn Nemesis Games Babylon's Ashes Persepolis Rising Praise for the Expanse: 'The science fictional equivalent of A Song of Ice and Fire' NPR Books 'As close as you'll get to a Hollywood blockbuster in book form' io9.com 'Great characters, excellent dialogue, memorable fights' wired.com 'High adventure equalling the best space opera has to offer, cutting-edge technology and a group of unforgettable characters . . . Perhaps one of the best tales the genre has yet to produce' Library Journal 'This is the future the way it's supposed to be' Wall Street Journal 'Tense and thrilling' SciFiNow

Peter Crossings and the Gate of Abaddon

Authors: James Andrew Wilson
Categories: Fiction
Type: BOOK - Published: 2004-04-01 - Publisher: Xulon Press
"The Christian rival to Harry Potter has come. Peter Crossings finds his life rather dull-all he really wants is an adventure. But when he is nearly killed by a strange shadow creature from another world, his life is quickly thrust into a journey beyond his imagination. Peter must confront ancient

Goethe, a new pantomime [in verse].

Abaddon, the Spirit of Destruction